Why I Love Quiltmaker Magazine

Do you subscribe to any print quilt magazines?  I used to subscribe to them all. It was like Christmas or my birthday when one would arrive in the mail.  I would pour through every page hunting up new projects, looking for trends, colors, or ideas which would inspire me to sew.  Later it became a source of inspiration for my own designs.  I felt I needed to stay aware of what was being published, and what quilters were buying and making.

I wrote off my subscriptions as a research expense.  Then when my patterns started appearing in magazines I had even more incentive to see what was being published.  I had to scope out the competition.

As I moved from publishing designs in magazines to publishing patterns I began to let my subscriptions lapse.  It was a lot of money and I found that I was letting issues -- still in their bags -- pile up on the coffee table, lonely and unread.  But I kept my subscription to Quiltmaker up to date.  I loved those Patch Pal patterns in every issue.  I vowed someday I would make them all. Their style was in sync with my own and I always felt my patterns would be a good fit for their editorial style, despite the fact that I never sent them any designs.  I did have a block in the #2 100 Blocks volume, but didn't send any others as you don't get paid for those.

So today 2 amazing things happened.  My July/August issue arrived in the mail. 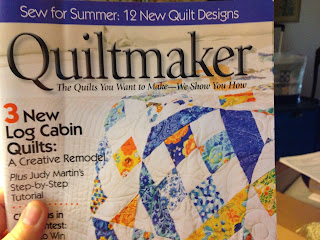 I had been tipped off by my friend Christie in OKC that there was a Patch Pal Flamingo in this issue so I was anxious to see it and scope out when I would have time to make it.

Sure enough, there it was, and just as cute as I  hoped it would be.  But then I started thumbing through the rest of the issue and an ad caught my eye. 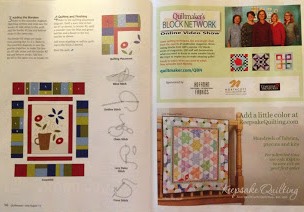 After I gasped I looked closer and sure enough, that was MY QUILT in the Keepsake Quilting Catalog ad.

They really should warn you that they are going to do that to fend off potential heart attacks when designers see their work in a magazine without prior warning!

I noticed they are out of stock!  Hey I shipped them more today so they will be there soon! They had been offering kits to go with this pattern.  If you want one, give them a call and ask when they will have them.  I will also have kits for sale at the Kansas City Regional Quilt Festival June 19, 20, 21 in Overland Park, KS if you want to pick one up in person.

Keepsake still has my Vintage Sampler pattern and kit on sale. 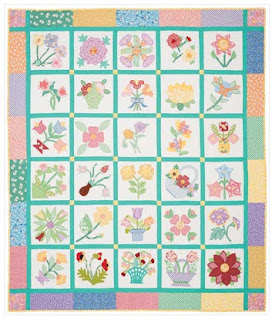 They have discounted the kit price on the Summer Iris Picnic Quilt.  Now would be a great time to pick up a kit for less $$. 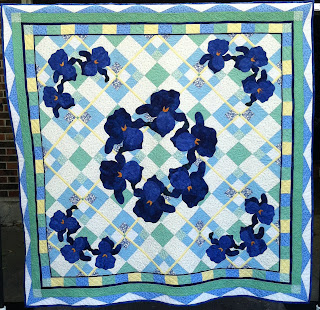 Heck, I even ordered one so I could make another one to give away!  LOL